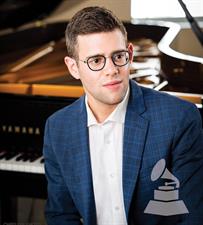 Pianist and composer Steven Feifke, known to many in Rockport for his dazzling performances with Alexa Tarantino, brings his heralded Big Band to Rockport for a night of Gershwin!

“An air of infectious joy.”
- DownBeat

Bandleader and composer Steven Feifke is recognized by GRAMMY.com as one of six big band composers pushing the format forwards and heralded a “masterful pianist” by JAZZIZ Magazine. He is an award-winning Yamaha Performing Artist and is one of the most in-demand artists of his generation. A two-time semi-finalist in the Thelonious Monk Jazz Piano Competition, Feifke has been featured on stages around the world alongside premiere artists including Steve Tyrell, Randy Brecker, Chad LB and Veronica Swift, with an impressive performance history at recognized venues like the Blue Note, Dizzy’s Club Coca-Cola, Birdland, Times Square and Rockefeller Center. International tours across Europe, Africa and Asia along with an extensive discography of over 30 albums all before turning 30 have established Feifke’s name as a global presence in jazz.

Feifke is an internationally recognized arranger and orchestrator, and has written commissioned works for notables, including the Manhattan School of Music Jazz Orchestra featuring Sean Jones and John Faddis. He is the recipient of the 2020 David Baker Prize in composition from the Ravinia Festival.

Feifke’s writing work also branches into film and television, where his compositions and orchestrations have been prominently featured on such hit TV shows as Comedians in Cars Getting Coffee on Netflix, Impractical Jokers on TruTV, Animaniacs on Hulu and the 2016 award-winning animated short Solo. His 2020 big band album “KINETIC” on Outside in Music marks Feifke’s studio big band debut, featuring an 18-piece ensemble made up of players from the frontline of the contemporary jazz scene like Ulysses Owens Jr, Veronica Swift and Lucas Pino.

WINDOW NOTICE: Due to the volume level of certain concerts, the curtain may be closed over the window for acoustical purposes. All efforts will be made to keep the view available prior to the concert.