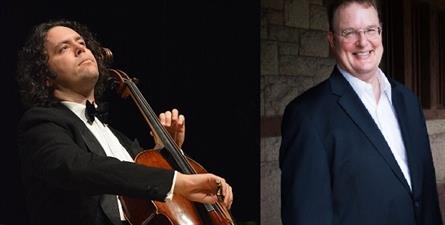 GUY FISHMAN, cello & IAN WATSON, harpsichord
Two Handel & Haydn Society principal players join forces for a rich, Italian-focused program including pieces by Gabrielli, Scarlatti, Frescobaldi and others. Guy Fishman is active as a concerto soloist, recitalist, chamber musician, and orchestral player. He is principal cellist of Boston’s Handel & Haydn Society, with which he made his Symphony Hall solo debut in 2005, and is in demand as an early music specialist in the United States and Europe, performing in recital and with The Arcadia Players, El Mundo, Aston Magna, The Boston Classical Trio, among others. An active educator, Fishman holds positions at the New England Conservatory of Music and several Boston-area universities. He presents lectures and masterclasses across the country. In addition, Fishman is a Fulbright Fellow, and spent his fellowship year in Amsterdam studying with famed cellist Anner Bylsma.

A highly accomplished pianist, harpsichordist and conductor, the British-born Ian Watson has forged a reputation as one of the world’s leading period-piece musicians. Watson, who is currently the artistic director of the esteemed Arcadia Players, has played with most of the leading British orchestras, including the London Symphony Orchestra, Royal Philharmonic Orchestra, BBC Philharmonic, English Chamber Orchestra, Scottish Chamber Orchestra, Academy of Ancient Music, English Baroque Soloists and the Academy of St Martin in the Fields among others. In addition to appearing on nearly 200 broadcasts and recordings, including as solo pianist on a recent award-winning CD’s with Renée Fleming and the English Chamber Orchestra, he is featured on many film soundtracks including Amadeus, Casper, Polanski's Death and the Maiden, Mr. Holland's Opus, Restoration and Cry the Beloved Country.