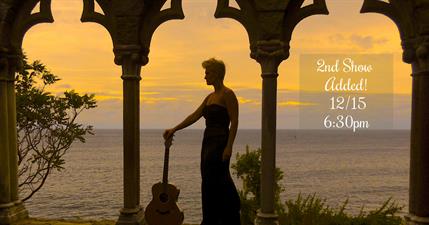 Due to popular demand, we have added a second performance!

Chelsea Berry’s powerful vocals fill the Great Hall with holiday cheer as she performs holiday classics and original works including some from her upcoming album!
Berry is a singer-songwriter with the edge, power, and finesse of legends. Her presence has been described by listeners as “compelling… she draws the entire house into her world like moths to a flame.” As a vocalist and performer, she evokes the style of artists such as Cheryl Crow, Eva Cassidy, KD Lang, and Melissa Etheridge. Singer-songwriter Livingston Taylor calls her vocals “world class” and says of Berry, “A voice of remarkable power and control with a joyous soul. Brave and bright, Chelsea Berry is the real thing.” A favorite among venue owners up and down the East coast, Berry’s beautiful voice and commanding stage presence has brought her across the U.S. as regular support for Livingston and others as well as headliner of her own shows. Born and raised in Alaska, she now makes her home in Essex, MA.

Berry has appeared on the cover of Boston magazines such as The Noise and Northshore Magazine. She has been featured multiple times on Boston’s 92.5 The River and Sirius XM’s The Loft as well as dozens of local stations from Maine to Florida. She has played Boston’s House of Blues, Carnegie Hall in New York City, the Shalin Liu in Rockport, MA, Eddie’s Attic in Atlanta, World Cafe Live in Philadelphia and more. She has opened for many artists such as Chris Isaak, Mavis Staples, Belinda Carlisle, Roger McGuinn, and Tom Chapin.

Berry was a 2016 Falcon Ridge Folk Festival Emerging Artist and has been a student of American songwriting legends such as Dave Van Ronk, Janis Ian, Susan Werner, and Ellis Paul.